The Pennsylvania Department of Environmental Protection (DEP) suspended reviews of permits and approvals for every Energy Transfer LP (ET) project. They alleged that the company has failed to comply with an order it issued last year after one of the company’s pipelines exploded in Beaver County.

The suspension would remain in effect until ET affiliate ETC Northeast Pipeline LLC corrects violations. It was discovered after part of the Revolution system blew up in Center Township last September. The permit hold would affect the Revolution pipeline’s return to service. It will also affect the completion of the Mariner East (ME) 2 and 2X pipeline projects on the other side of the state.

DEP last October ordered the company to stop all work on the damaged Revolution system in the aftermath of the explosion and directed the company to immediately stabilize disturbed areas and repair erosion controls, which it has struggled to do since, partly due to the area’s terrain.

“Multiple inspections by DEP staff, most recently in January 2019, found that ET had not fulfilled the terms of the order and was not progressing toward compliance”

ET spokesperson Alexis Daniel stressed that the suspension does not affect the operation of any of the company’s in-service pipelines or areas of construction where permits have already been issued.

Friday’s announcement only complicates things for ET in the state. Affiliate Sunoco Pipeline LP’s ME 1 system remains offline after it shuts down in 20 Jan. That is when a sinkhole exposed the system in Chester County. It was not the first time that this happened. Sunoco started partial service last month on ME 2 using an old refined products pipeline. It happened after state regulators forced it to stop work on a small stretch of the mainline. Sunoco were to get new permits from DEP when other sinkholes formed in the same area.

Those injunctions remain in effect. DEP said that the suspension impacted 27 approvals currently under review for the ME 2 natural gas liquids projects.

“ There has been a failure; Its subsidiaries to respect our laws and our communities. This is not how we strive to do business in Pennsylvania, and it will not be tolerated.”

Revolution has been offline since the explosion in Center Township. It is a 100-mile system that moves 400 MMcf/d of natural gas from Butler County, PA, to Washington County, PA. ET said torrential rain and saturated ground that has plagued the region likely caused the pipeline to slip and explode.

DEP said that the suspension would not apply to any approvals needed for ET to ultimately comply with the October order. The agency also said it could eventually take additional enforcement action to address the ongoing issues. 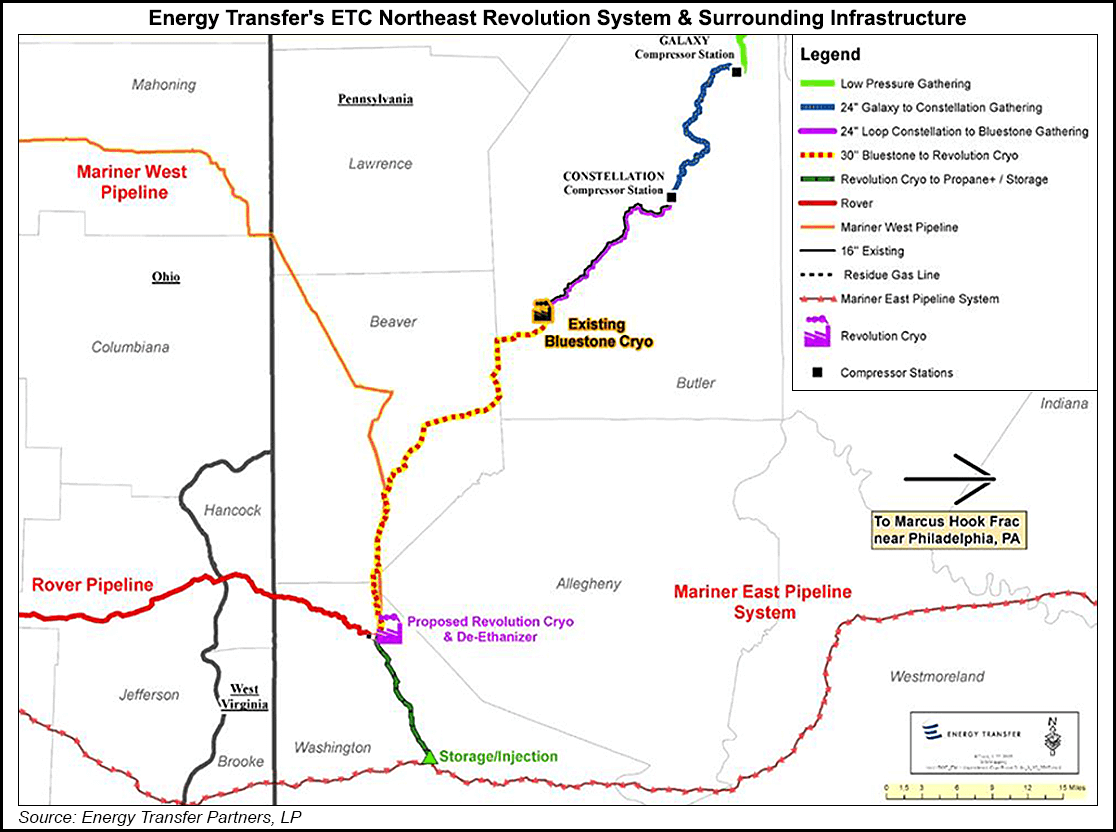