HOUSTON (Bloomberg) –Exxon Mobil posted its first loss in at least 32 years while Chevron Corp. deepened spending cuts amid the economic and industrial devastation wrought by the Covid-19 contagion. The worst may be yet to come.

Exxon reported a $610 million loss on Friday, the oil giant’s first since at least 1988, and said it’s shutting hundreds of thousands of barrels of daily output. Meanwhile, Chevron slashed capital spending for the second time in five weeks and accelerated supply curbs.

The results are precursors of even starker figures to come because the earnings period ended on March 31 — three weeks before crude prices tumbled into negative territory for the first time in history. Exxon fell 1.8% to $45.63 at 9:45 a.m. in New York trading. Chevron dropped 2.3%.

Oil producers are slashing spending and production to cope with the collapse in energy demand that’s accompanied coronavirus lockdowns around the world. The downturn has destroyed billions of dollars in value, sidelined entire drilling programs, erased thousands of jobs and sent some drillers into bankruptcy.

Almost $3 billion in writedowns bit into Exxon’s first-quarter results, driving a per-share loss of 14 cents that was far worse than analysts anticipated. Oil and natural gas output rose 2% during the period.

Despite the current downturn, Exxon maintained its long-standing optimism about future demand growth. “Economic activity will return, and populations and standards of living will increase, which will in turn drive demand for our products and a recovery of the industry,” Chief Executive Officer Darren Woods said in the statement.

Woods stuck to the $10 billion in spending cuts announced on April 7.

As for Chevron, full-year spending was cut as much as 13% from the previous plan, the world’s No. 3 oil explorer by market value said in a statement. Chevron also will shut down as much as 400,000 barrels of daily output and retire 60% of the drilling rigs it has under lease. 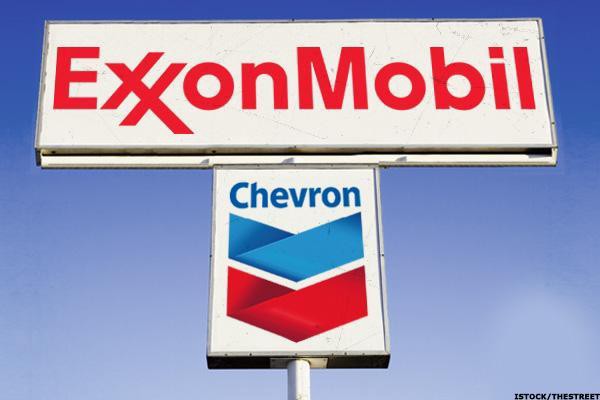