DynaEnergetics, a business of DMC Global Inc. has announced it achieved a 100% success rate on field trials of its new DS Trinity™ perforating system. DS Trinity, which features three charges on a single plane, is a member of the DynaStage™ family of Factory-Assembled, Performance-Assured™ perforating systems. The field trials were conducted in 6 in. casing using a 4 in. OD (outer diameter) DS Trinity system.

The patent-pending DS Trinity was designed to deliver a cost-effective, length-optimised solution that provides operators with greater flexibility in designing their oil and gas well completions. At 8 in. in length, DS Trinity is up to 3.5 times shorter than conventional perforating guns, enabling much higher gun counts per stage. The reduced length was achieved by aligning the charges on a plane, versus the traditional spiral placement of charges down the length of a gun. The system also eliminates the sub adaptor typically used to connect adjacent guns in a string. The optimised length enables customers to run more guns per stage or reduce the required height of rig-up cranes and pressure control equipment.

“Our field trials were conducted in partnership with a large US-based operator that provided important input on the key features and functionality of the system,”

“The DS Trinity solution leverages the performance, features and safety of our commercially successful DynaStage system. Moreover, the 100% success rate achieved in the trials illustrates that both systems deliver equivalent reliability levels.”

DynaEnergetics intends to commercialise the 4 in. OD version of DS Trinity in the second quarter. A 3 ½ in. OD version designed for use in 5 ½ in. casing is scheduled for release shortly thereafter.

In one of the recent field trials, the customer successfully shot 32 stages in 6 in. casing. The customer utilised 25 4 in. DS Trinity systems per stage and perforated in 10 ft increments. The trial was completed with charges that provided the caliber equivalent of a four-shot gun.

The 4 in. guns were used in lieu of typical 3 1/8 in. guns to minimise the gap between the gun body and casing. This created more consistent perforations and improved overall fracture stimulation. The system also enabled accelerated pump down operations and reduced water usage.

Based on the success of the trials, the operator said it plans to complete additional jobs in the coming months using the 4-inch DS Trinity system.

Tags: IT, Oil and Gas 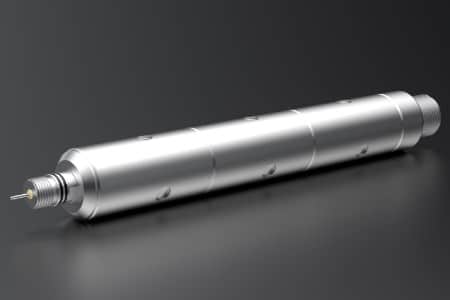