BEIJING/CHICAGO (Reuters) – With nearly seven months gone, an ambitious $36.5 billion target for Chinese imports of U.S. farm goods this year may not be quite out of reach, but it’s looking like a big, big stretch.

By end-May, imports were running behind 2017 levels – rather than 50% ahead as needed – and while orders for China’s main farm import, soybeans, have started to pick up, scorching levels of buying would be needed to hit the mark.

Add in a rapid deterioration in U.S.-China relations, an upcoming U.S. election, a global pandemic and questions over just how much soybeans China actually needs, and farmers and analysts say it may be a stretch too far.

“It just doesn’t seem likely to me,” said John Payne, senior futures & options broker with Daniels Trading in Chicago. “If the global economy was more normal then maybe, but you have this whole COVID problem.”

Beijing and Washington sealed their Phase 1 trade deal in January after two years of acrimony and a steep slump in imports by one of the biggest buyers of U.S. agricultural goods.

Analysts at the time expressed reservations about the farm goods target, which is a quarter above 2013’s all-time high of $29 billion.

Still, Chinese buyers stepped up purchases this year of a range of farm imports, sealing record deals in corn and meat imports, prompting some optimism.

“If I were to grade them today, we went from a C- to a B, and if it continues maybe we can start to see higher levels. But it needs to be a continual, ongoing affair,” said Dan Basse, president of AgResource Co in Chicago.

The chances of meeting the target will be clear in the next few months. Soybeans typically account for about half of China’s U.S. farm imports and the vast bulk of buying comes in the last three months of the year when supplies from top grower Brazil dry up.

After a slow start, Chinese importers booked more than $2.5 billion in U.S. soy purchases in just the past eight weeks.

“We may be on the verge of really beginning to ramp up sales to China. I think you’re going to start seeing these chunks of soybean sales happening pretty soon because Brazil’s getting close to sold out,” said John Baize, president of consultancy John C. Baize & Associates.

It’s unclear, however, whether China will sustain its appetite over the next five months after its crushers earlier snapped up record volumes from Brazil.

Demand will also depend on China’s recovery from a disease that killed hundreds of millions of pigs, reducing the need for feed.

For soybeans to make up half of the $36.5 billion target, buyers would have to take some $2.8 billion a month from July to December, according to Reuters calculations.

This pace of monthly buying has never been sustained for more than two straight months and only then during the fourth quarter of the year, most recently in 2016.

Falling commodity prices due to the coronavirus pandemic present an added difficulty, with the deal tied squarely to the value of imports. Soybean prices this year have averaged around 10% less than in 2016.

Trade in other products, meanwhile, may find it hard to hold their early trajectory.

Chinese buyers bought more than $500 million of corn in the first half of July, but importers are thought to have nearly filled their import quotas and the country’s own crop will be ready for harvest from September.

China also spent record amounts on meat through May, including over $1.2 billion on pork, according to USDA data, but overall spending on meat is relatively small.

The sales have disappointed U.S. farmers hoping for a Chinese buying bonanza.

“It’s been rocky, to say the least,” said North Dakota farmer Paul Sproule. “They have been making some buys lately, which we appreciate. But with closing down the consulates and the issues with Hong Kong, relations are only getting worse.”

In all, a daunting figure of roughly $25 billion of purchases will be needed for the second six months of the year, according to Reuters calculations.

China may not violate the deal if it misses the target due to the impact of coronavirus. The deal grants flexibility in the event of “a natural disaster or other unforeseeable event.”

At the same time, politics will come into play.

With bilateral relations in turmoil, China may want to avoid making itself a bigger target for criticism from U.S. President Donald Trump during the U.S. election campaign by failing to make big agricultural purchases.

The final volumes of China’s soybean purchases will likely depend on whether or not Beijing chooses to replenish government stockpiles.

“It would be a separate story if the beans go into state reserves,” he said.

China-based sources said China will want to avoid the reputational damage of not meeting its commitments if possible.

“We will bite our teeth and implement the trade deal. Otherwise, we don’t look good on the international stage,” said a trading manager with a state-run firm.

“But we would need to buy in an explosive way.” 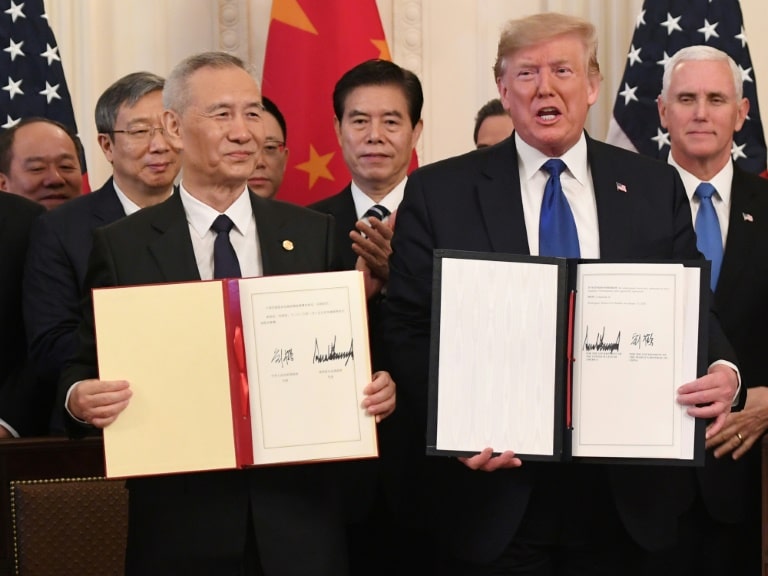